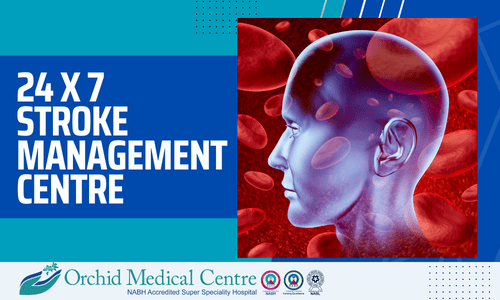 A stroke is an emergency health condition. It’s crucial to be able to spot a stroke’s warning signals. When treatment is initiated right away after a stroke, recovery chances are at their highest. If you notice any of these signs, call 9117100100 and head straight to the hospital.

There are 3 major stroke types:

Approximately 80–90% of all strokes are ischemic strokes, making it by far the most prevalent kind of stroke. Ischemic stroke is a condition in which there is insufficient blood flow to a part of the brain (ischemia), depriving brain cells of oxygen and other nutrients and ultimately causing cell death.

The symptoms of a transient ischemic attack (TIA), which are similar to those of an ischemic stroke, disappear completely, typically within an hour. Imaging investigations do not reveal any signs of tissue damage after TIAs. In a TIA, a blockage in a brain artery reduces blood flow, similar to an ischemic stroke, but the blockage is repaired naturally, preventing permanent damage to the brain tissue. The average TIA only lasts five to 10 minutes. TIA is a severe warning symptom that can occur days or weeks before a stroke. Patients who experience TIAs should undergo a thorough evaluation as soon as possible to identify the cause and begin treatment to help prevent stroke because TIAs are brought on by the same mechanisms that cause stroke.

In a hemorrhagic stroke, the brain bleeds. Small blood veins in the brain burst, resulting in this kind of stroke. Damage to brain cells is caused by the leaking vessel’s blood flow. Aneurysms and arteriovenous malformations are two forms of weakened blood vessels that commonly result in hemorrhagic stroke (AVMs).

Occurance of stroke in young adults and kids.

Up to 10% of strokes may happen in people who are still relatively young (under 45 years of age), which makes detection and treatment difficult. A number of unusual disorders that can affect young adults, are expertly diagnosed and treated by the Department of Neuroscience at Orchid Medical Centre.

Recognizing the risk factors for stroke

Risk factors are characteristics or actions that raise a person’s likelihood of contracting a disease. There are two groups of stroke risk factors:

A patient’s risk of stroke increases with the number of risk factors they have.

Advanced medical and surgical procedures are expertly handled by neuro-physicians and neurosurgeons at Orchid Medical Centre.

If you have any symptoms of Stroke, then consult one of the best Neuro Physicians in Ranchi Jharkhand.