Treatment for enlarged prostate in Ranchi 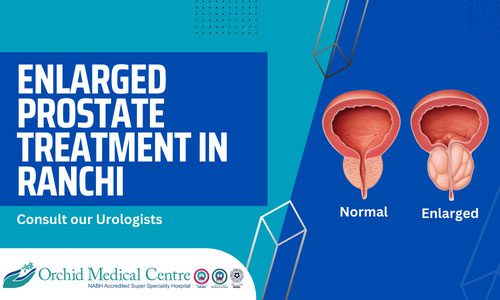 One of the glands responsible for producing the fluid that delivers sperm during ejaculation is the prostate. The urethra, the tube via which urine exits the body, is surrounded by the prostate gland.The gland has grown bigger if the prostate is enlarged. The medical word for an enlarged prostate, a disorder that may affect how you urinate, is benign prostatic enlargement (BPE).BPE is typical in men over 50. It’s not cancer, and it doesn’t normally pose a major risk to your health. Almost all men have prostate enlargement as they age. Men are concerned that having an enlarged prostate may make them more prone to get prostate cancer. That is not the situation.Men with enlarged prostates do not have a higher chance of developing prostate cancer than men with normal-sized prostates.

Because it is so common, it has been said that if men live long enough, they will all develop an enlarged prostate. Many men over the age of 40 have a slight prostate enlargement. Itaffects more than 90% of people older than 80 years.

Between the penis and bladder in the pelvis is a tiny gland known as the prostate.

The bladder and the urethra, the tube through which urine travels, may be compressed if the prostate becomes large.

This may influence your urination and result in:

Some men’s symptoms are minor and don’t require medical attention. Others may find them to be exceedingly bothersome.

Although the exact cause of prostate enlargement is not certain, it is thought to be related to hormonal changes that occur as a man ages.

As you age your prostate gland may enlarge because of changes in the hormone balance in your body.

Only around half of men with enlarged prostrates experience symptoms. Some signs could be:

To determine whether you have an enlarged prostate, you may need to take few tests.

Few tests are done to rule out other diseases with symptoms common to prostate enlargement like prostate cancer.

Treatment of enlarged prostate at the Department of Urology, Orchid Medical Centre.

As you have read earlier that prostate enlargement is a very common condition seen as you age.

Do not shy away if you have any of the given symptoms. Consult one of the best urologists in Ranchi, Jharkhand for enlarged prostate treatment at Orchid Medical Centre.